Although the land purchase took place in 1927, the actual construction of the new WLH building only commenced in 1927 (or early 1928) but was not completed that quickly. The construction was completed in early 1932 and the new hospital opened in that same year. These dates would make more practical sense for a project of this magnitude - not to mention they also had to construct many other buildings that were smaller but possessed important auxiliary functions, as well as staff housings, including the house for Dr. and Mrs. Perkins on South Ta-Ling Lu (塔玲南路).

Please refer to webpages from WLH Constructions, and please also see below for a few key photos that are dated.

Consequently, those camphor trees are roughly 85 years old today - so is the WLH Building. 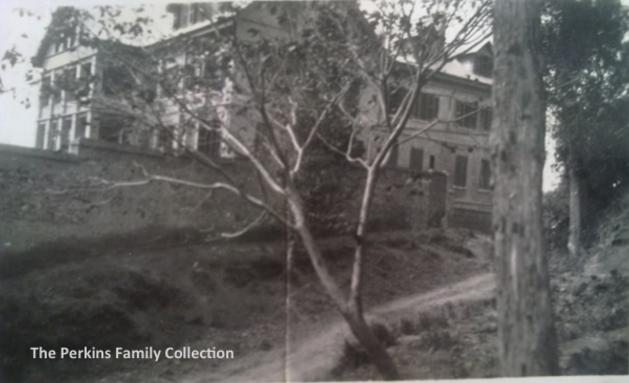 There are no records of Rev. Dr. Hart and Rev. Dr. Elbert Todd, or any other missionaries, opening a clinic next to a primary school in 1893.  There was a record of Dr. William E. Tarbell opening a dispensary in 1875, but that was discontinued in 1876.

Dr. Isaac N. Danforth established the very first organized clinic or hospital in Kiukiang. The year was 1901, and the hospital was for women and children only, and not men. It was named The Danforth Memorial Hospital (但福德医院) in honor of his late wife, Elizabeth Skelton Danforth. Dr. Ida Kahn (康成) and Dr. Mary Stone (石美玉), two of the earliest and the most influential Chinese women at the turn of 20th Century, served as the first Co-Directors of the hospital. Until then, there might be lone efforts in terms of medical work in Kiukiang for women or men, and there remained none for men until 1918.

Dr. Perkins visited Kiukiang very briefly in 1910 before completing his internship at St. Luke’s Hospital in New York City. He returned to Kiukiang in 1914 after studying Chinese in Nanking (Nanjing, 南京) in 1913.  Between 1914 and 1915, he worked for the only hospital in Kiukiang, The Danforth Memorial Hospital (但福德医院), where he recognized there were no clinics of any sorts let alone hospitals for men in Kiukiang.

After marrying Mrs. Perkins in 1916, they spent nearly two years in Nanking where Mrs. Perkins studied Chinese at Nanking University Language School <南京金陵大學華言學堂>, while Dr. Perkins served as a physician for Methodist missionaries in the city of Nanking, as well as worked for University Hospital of Nanking. During this time, Dr. Perkins laid out the groundwork to build a brand new hospital for men in Kiukiang. 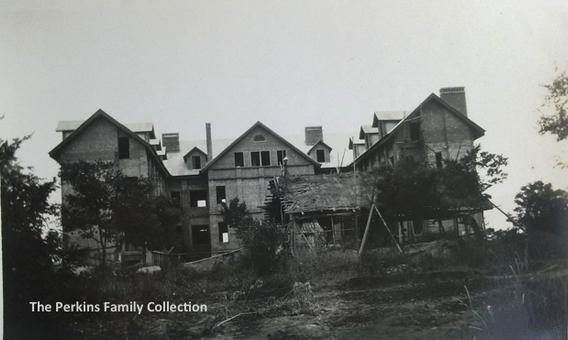 Amending The Introduction to WLH <改写生命活水楼简介> 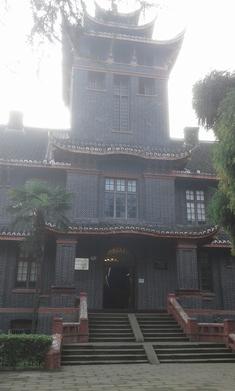 Foremost, I am very grateful for this giant board posted adjacent to the WLH's original front entrance. The board's content sincerely acknowledges the origin of this building and speaks proudly of the history and accomplishment of this hospital over the past century. Besides, I appreciate the attempt to be as accurate as possible despite the obvious loss of records and documentation over the years.

With such discernment, I would like to amend some of these contents therein. While I am confident in my amended materials, some deserve further research and could stand corrected.

Dr. Kupfer served as the first Headmaster of William Nast Academy for boys (九江同文中学) in Kiukiang from 1881 through 1888, right after Dr. Thomas C. Carter had opened it in 1881. Initially, the school was known as Fowler University.  Dr. Kupfer was again the Headmaster from 1901 through 1918 until the War (the brutal one that was supposed to end all wars) got in the way. He was asked to step down because of his German heritage (Dr. Kupfer immigrated to the US as a child with his parents, and so, should have been regarded as an American).

From 1883 to 1886, Dr. Kupfer's wife, Lydia, succeeded Ms. Gertrude Howe (Chinese name: 昊格矩) as the Headmaster of a new Girl's School that would eventually become Girl’s High (儒励女子中学). It is noteworthy that Ms. Howe was Dr. Ida Kahn's adoptive mother and was equally instrumental in Dr. Mary Stone's life.  She and another woman named Ms. Lucy H. Hoag landed in Kiukiang in 1872, and they established the first school for girls in 1873. They were the two earliest woman missionaries in Kiukiang, representing Woman's Foreign Missionary Society (WFMS) for the Methodist Episcopal Church.

Dr. Kuper wrote a book listed under The Cornell University Library:Sacred Places in China. Press of The Western Methodist Book Concern, Cincinnati, OH: 1911.  There are no current Copyright restrictions.

The year 1867 is correct. Indeed, two men who came to Kiukiang，Kiangsi (Jiujiang, Jiangxi：江西省,九江) in 1867 from Foochow, Fukien (Fuzhou, Fujian: 福建省,福州: See Map), which was the very first missionary station in China for The Methodist Episcopal Church (today’s United Methodist Church). The two men’s names were Rev. Dr. Virgil C. Hart and Rev. Dr. Elbert S. Todd, and they represent the earliest missionaries who ventured into Central Yangtze River Valley.  Their arrival essentially made Kiukiang the de facto first mission station for Methodist Episcopal Church, or likely the first of many Protestant missions from North America in Central China.

Rev. Dr. Hart (an honorarium doctoral degree was conferred to him later) was known as a key figure in Christian missions for Central and Western China, spanning nearly the entire Yangtze River. His most influential work, and that of his wife, Addie, were done in the city of Chengdu, Sichuan (四川省,成都). Mrs. Hart was Canadian, although Dr. Hart was a boy from Watertown, NY. Their accomplishments ranged from establishing schools with a modern curriculum, advocating educations for girls and women, and calling medical missionaries to bring forth western medicines and build modern hospitals. Sichuan University in Chengdu currently has a building named after him. Rev. Dr. Hart’s pioneering work preceded Dr. Edward C. Perkins and Mrs. Perkins by a generation or more. Still, their ultimate endeavor was undoubtedly linked to Rev. Dr. Hart’s call for physicians to help China.

Dr. Edgerton H. Hart, son of Rev. Dr. Hart and Mrs. Hart, like Dr. Perkins, was a surgeon and served as the Director of the Wuhu General Hospital (芜湖总医院) in Wuhu, Anhui (安徽省,芜湖) for nearly two decades.  I included this detail here because Dr. Hyla Watters, a close friend of the Perkins, also worked at the Wuhu General Hospital for most of her career as a missionary in China.

There is also a book listed under The Cornell University Library: E. I. Hart, D.D. Virgil C. Hart: Missionary Statesman. Founder of The American and Canadian Missions in Central and West China. George Doran Company, New York, New York: 1917.  There are no current Copyright restrictions.

Much less is known about Rev. Dr. Elbert S. Todd.

Rev. Dr. Todd was a farm boy from Adrian, Michigan.  He attended Adrian College with his parents' encouragement, and then later, he enrolled at The Union Theological Seminary in New York City. There is a fine portrait of the man and a Chapter briefly describing him (and his journey with his family to China and ultimately to Kiukiang in 1867) in this book illustrating the life of his niece, Ms. Eva Todd Burch: The Beautiful Life of Eva Todd Burch. 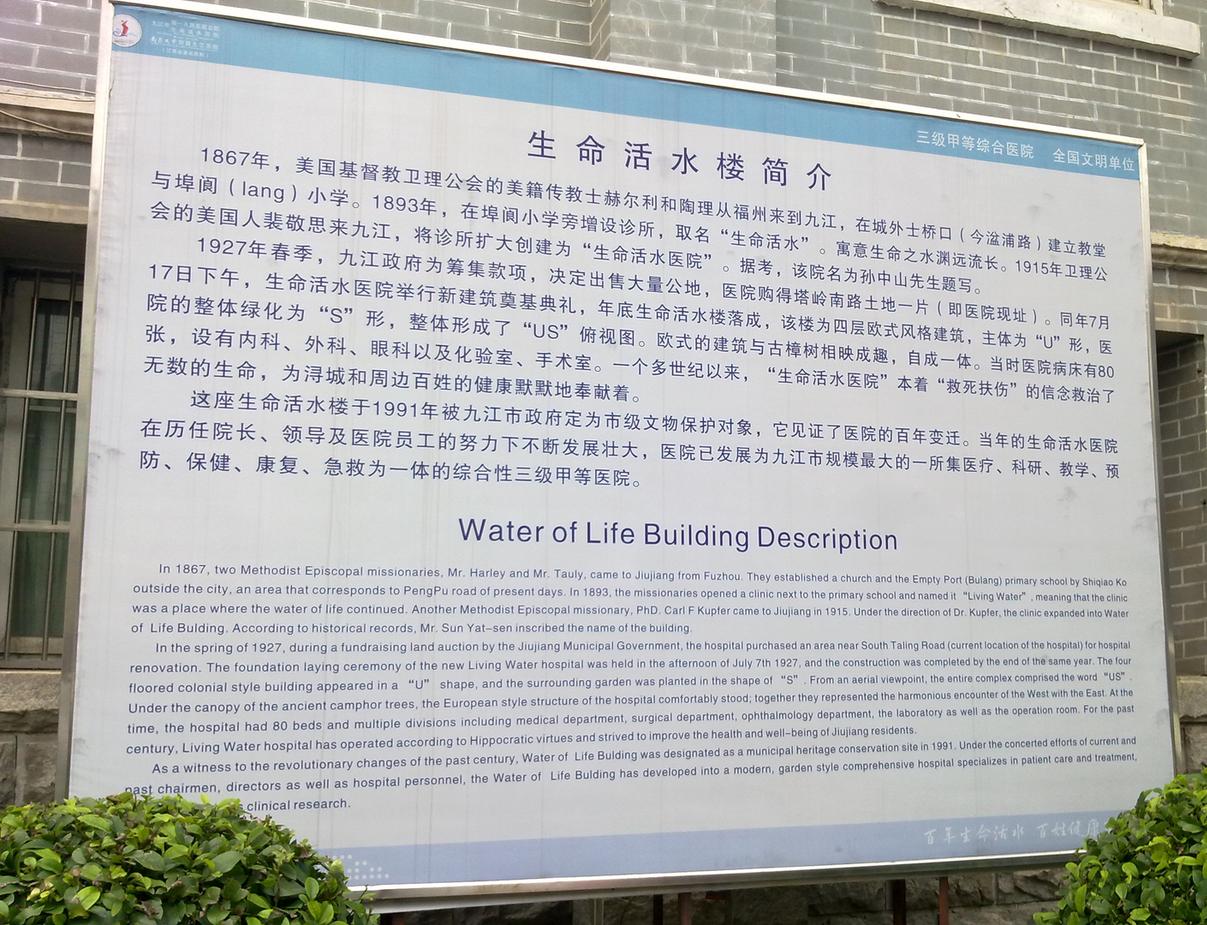 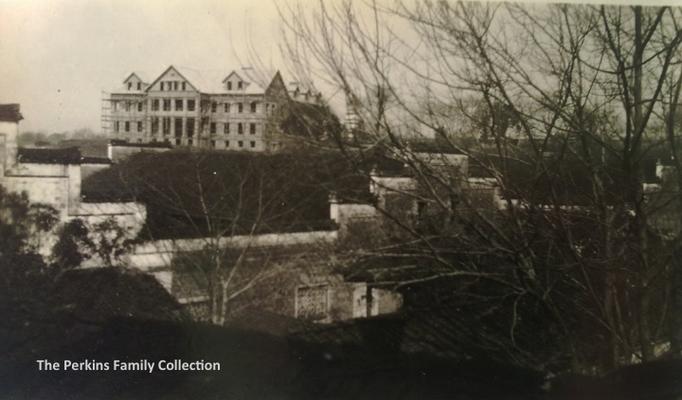 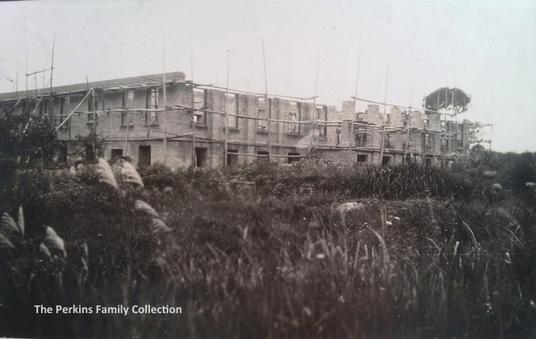 In the process of construction, early November of 1929."

"1932, the main building, Water of Life Hospital (W.L.H.), Kiukiang, Ki.,China, a section thereof still in the process of construction (in near completion)--taken from the old (WLH)"

In 1918, the first clinic for men opened in a rented building in Kiukiang.

The name "Water of Life" was chosen because of a Biblical passage that endeared Dr. Perkins. Given that The Book has millions of these "catchy" phrases and passages, it would be very difficult even for most ardent and knowledgeable Biblical scholars to stumble upon this rather obscure one as a name for anything without a very personal story behind it. Thus, it is nearly impossible that anyone outside Dr. Perkins would have come up with this name on or before 1918.

More importantly,  although it would be a great honor if indeed true that Dr. Sun Yat-Sen (孫中山先生) had handwritten the sign for the hospital, there was no record of the two men ever meeting one another.

This website believes that the stated connection is fleeting outside the fact that Dr. Sun’s father-in-law and close friend, Mr. Charles Soong, was a Methodist Episcopal minister. Madam Sun Ya-Sen, or Ms. Soong Ching-Ling (宋慶齡), was Mr. Soong's oldest daughter and second of six children. 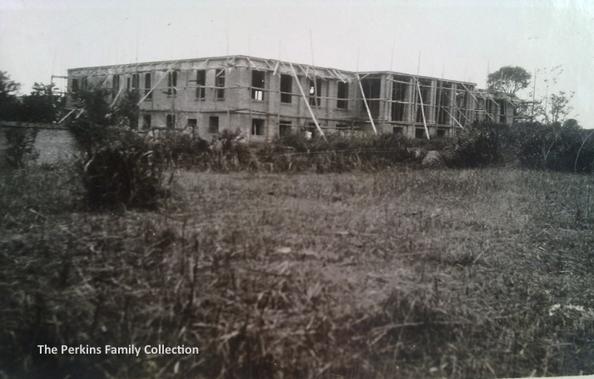 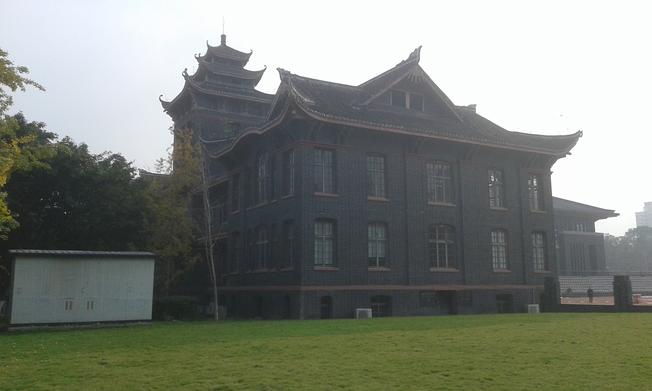