A glimpse of the original bricks underneath the peeled off plaster below the window.

The originally Front Gate is still the front gate but with a newer sign to demarcate its history:

Most of the building is being used for inpatient care; the top floor hosts mostly administrative offices.

Left Photo: The original stairway in East Wing right inside the side door.

Right Photo: A cafeteria named "活水人餐厅" (Meaning: Cafeteria for People of Water of Life) by the outer side of East Wing – sandwiched by another building. 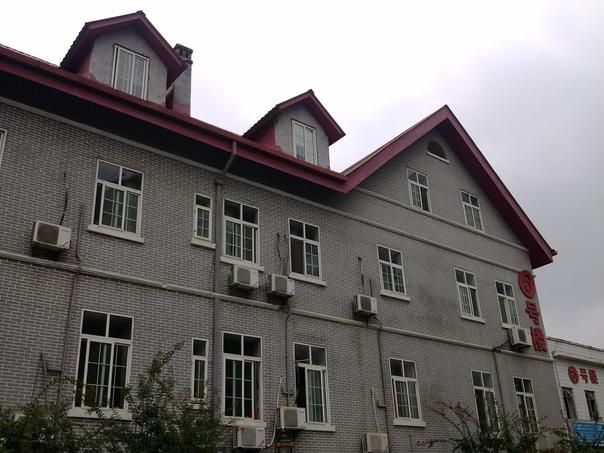 East Wing's Outer Side: Left side (left and center photos) and right side of the Wing (right photo - a side door is underneath the banner). 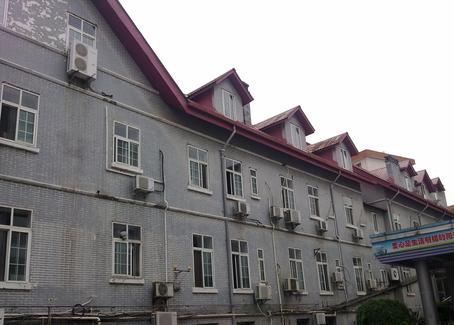 To Read "Amending the WLH Introduction"

The original 1932 WLH Building is situated near the modern main building separated by a small amphitheater-like garden named "Water of Life Plaza (生命活水广场)." When one walks up these steps through the garden, one could spot its West Wing peeking out from behind many century-old trees likely planted during the hospital construction. Although a bit distracting or out of place for being right at the center of the entire hospital compound, the garden is nicely built and hosts many of these old trees. There are also a few sculptures as well as a wall filled with Chinese writings. 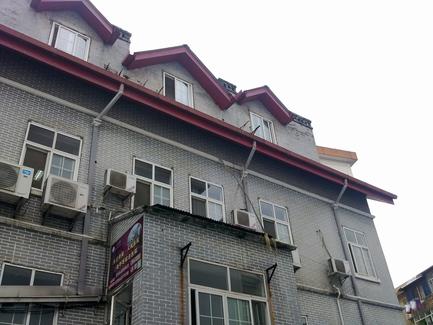 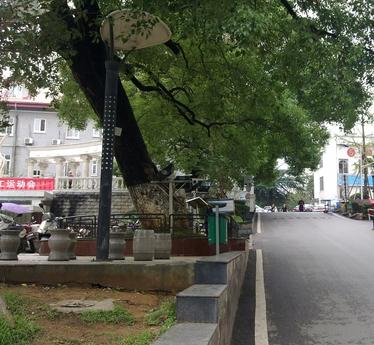 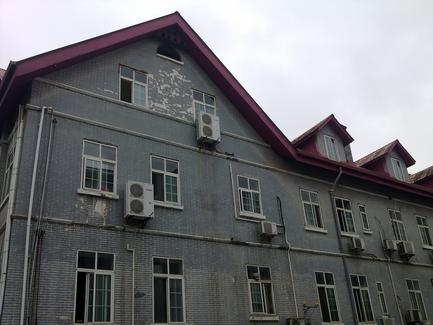 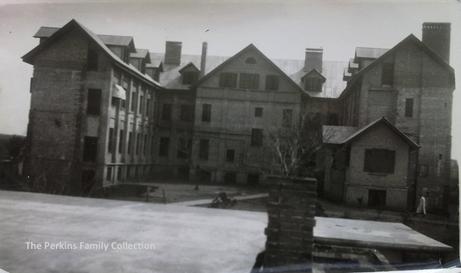 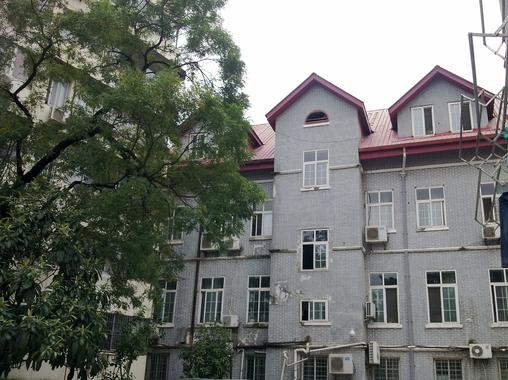 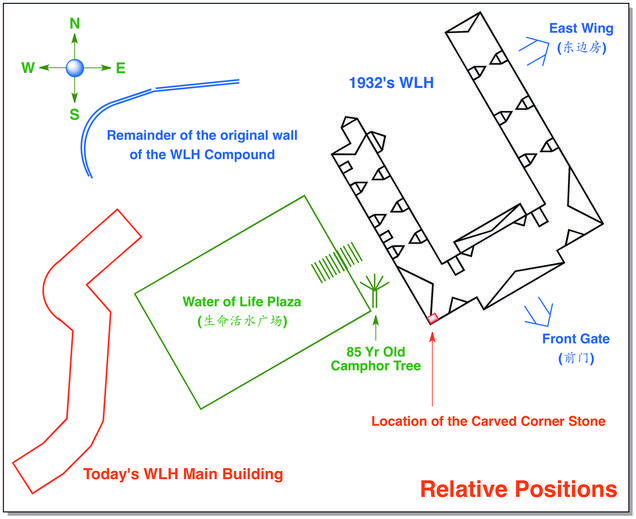 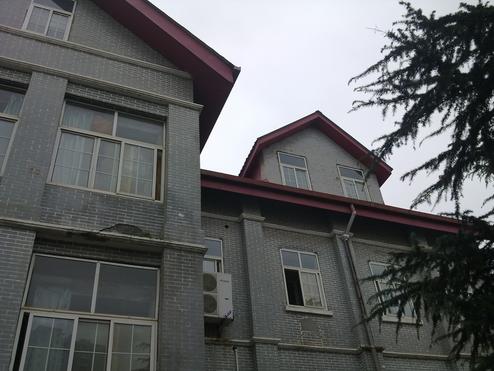 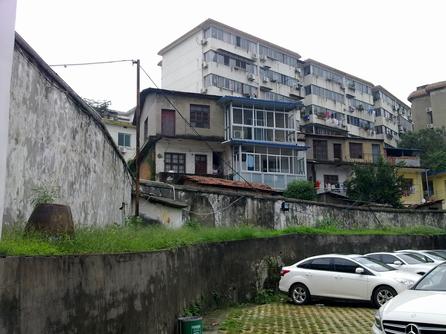 Based on the precise geographic positioning of WLH, the photo above was taken in a direction almost straight South-to-North!

In this Webpage, three sides of the U-shaped building will be called West Wing (the shorter arm of the U), Front Gate,

and East Wing (the longer arm of the U). 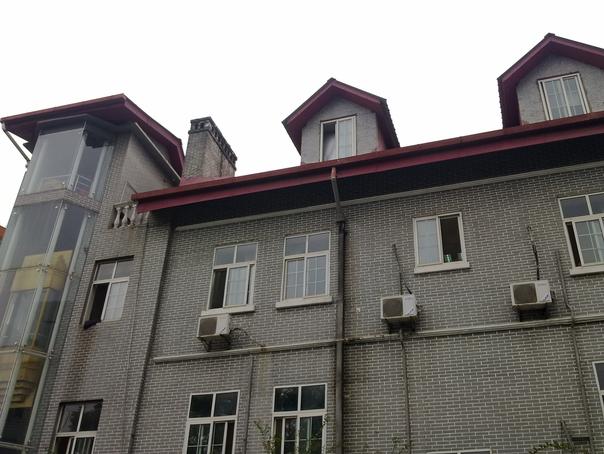 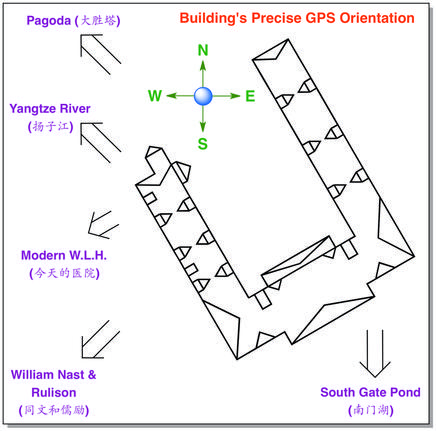 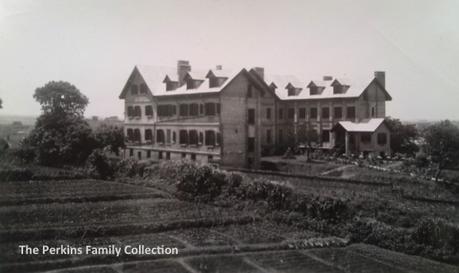 East Wing's interior side (the longer one of two arms of the U) – facing the Courtyard: There is no real courtyard left, as it is now mostly filled with a one-story building with a red roof (see photo at left). 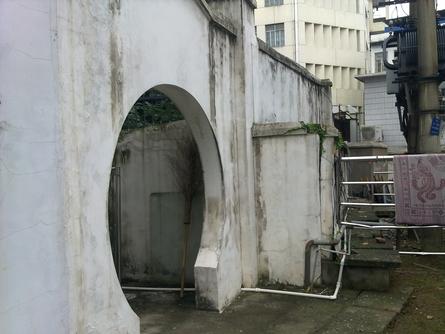 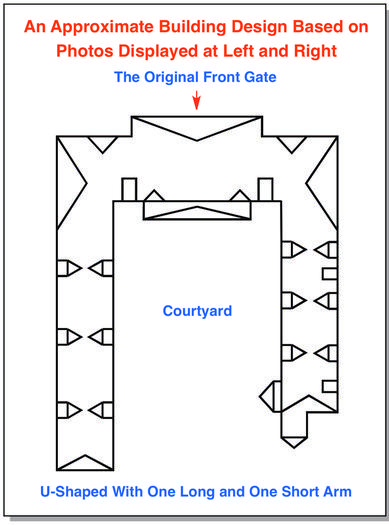 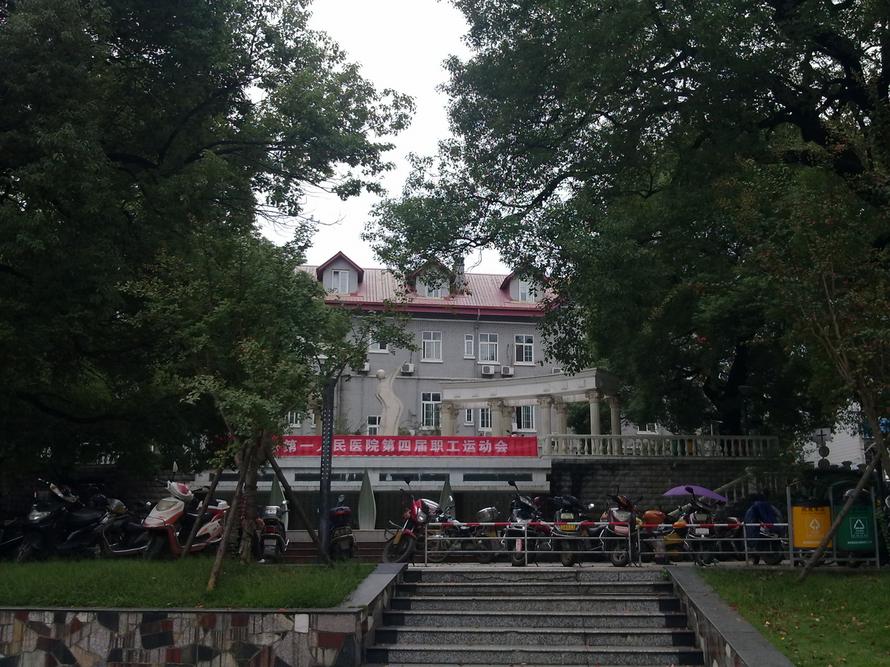 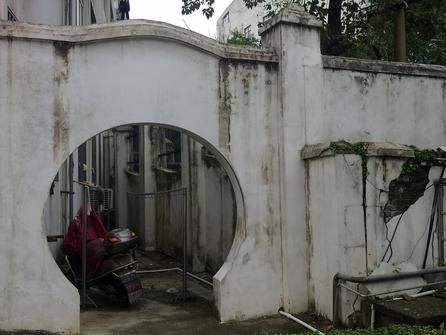 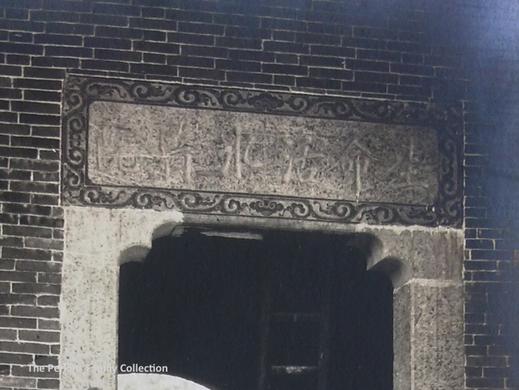 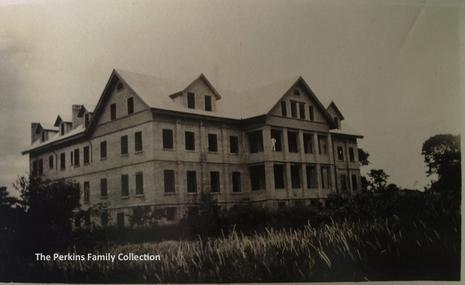 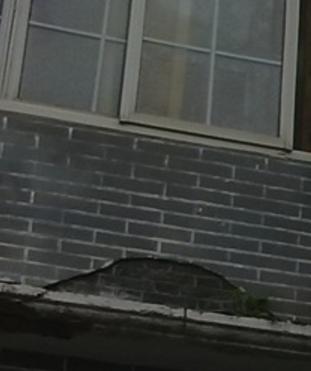 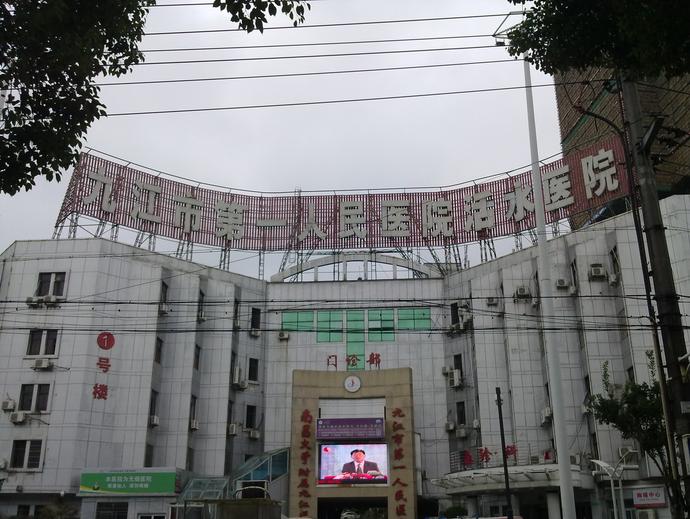 Right side of the West Wing: 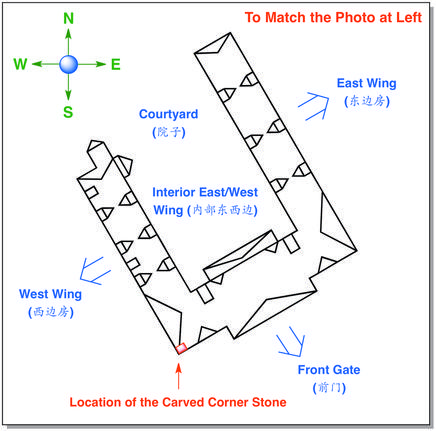 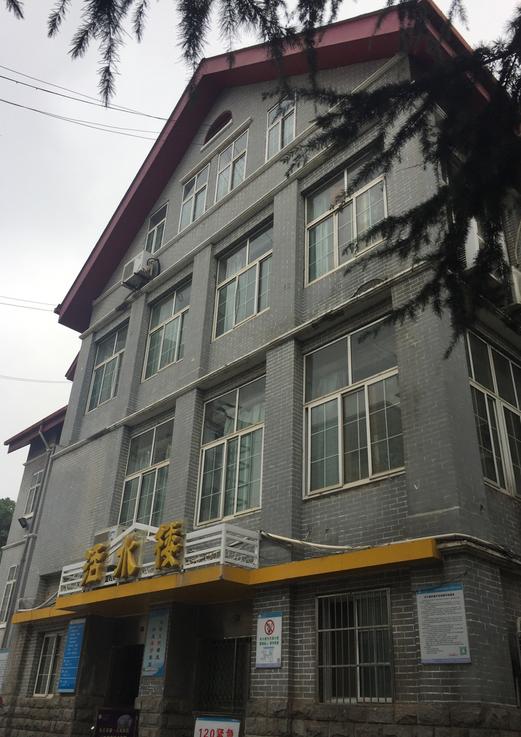 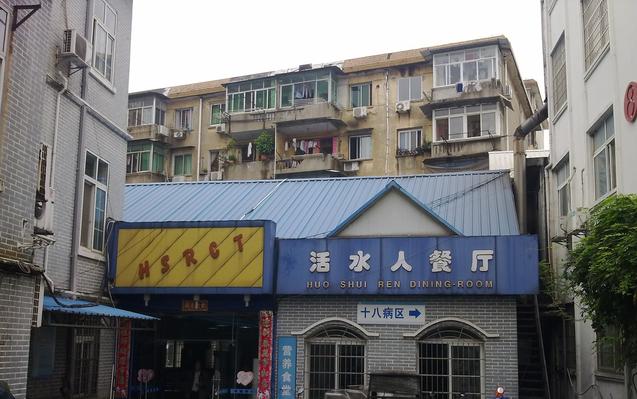 The remains of the original hospital walls by East Wing (left and center photos), and a clear stretch on the west side of the WLH Building (right photo and see the diagram below right) with staff housings right behind it, while encircling a small parking lot. 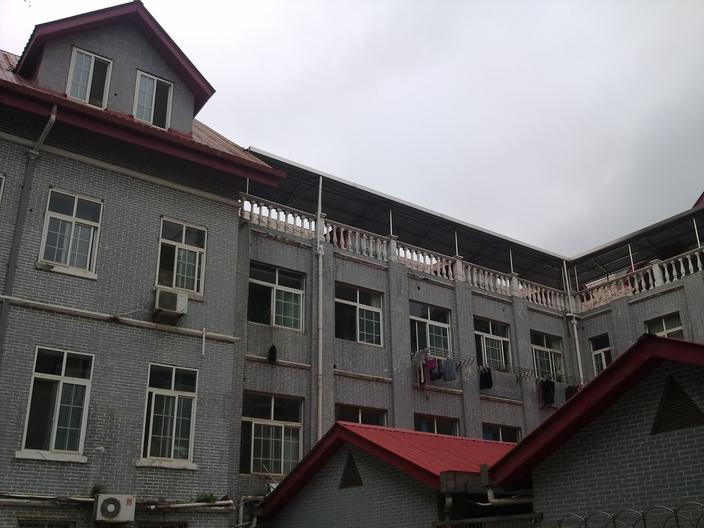 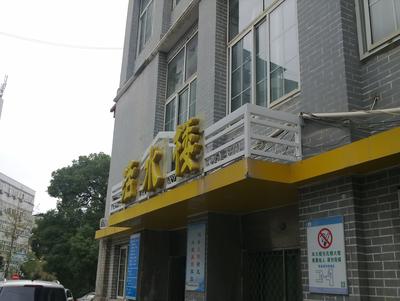 MY REFLECTIONS. By now, I had already spent a better part of the day walking around this old building and its surroundings. The day was cloudy, but at times there was a steady and cold drizzle due to Typhoon Haima, which forced me to duck into a shop and wait when it got too wet. I was not sure how I would have felt seeing all of this, after spending so much time this past year looking at the old photographs from The Perkins Family Collection.

I guess the weather decided it for me.

I don't dislike the gray-colored plaster they used to cover up the old building, as it matches well with the original red roof, and that they did a fine job of making the building look both natural and close to what it had looked like. But this color just seemed to add another shade to an already depressed feeling, especially when strolling past these old walls. They say walls remember – but walls can also talk - you know.

I appreciated that no one seemed to mind that I had been there for hours walking around and snapping photos. A few elderly patients sitting in the garden were rather amused that I was so into those trees and the sign by them. Even when I entered into the East Wing from a side door to snap a photo of the old wooden stairway, a nurse only quizzically stared at me before walking away. I took a good look at the hallway as her shadow disappeared into one of the patient's rooms on the first floor. I then decided to stop "exploring" the interior of the building.

I quietly walked out, but at that very moment, I felt a twinge of delight. Dr. and Mrs. Perkins would be ecstatic right now if they knew their Water of Life Hospital is fully functional and operational since they left the hospital and the city of Kiukiang behind some 66 years ago (in 1950)! The building's longevity is truly amazing, especially considering that there was a not so small earthquake (Richter scale 5.7) in 2005 centered in Rui-Chang, Jiangxi (瑞昌,江西) just 40 miles west of Kiukiang!

Even with much preparation and recognition of the 1932 WLH Building from all those photos, I had no clue of its precise location. I even walked right past the new main building (see below) with another location in mind further down the street before peeking into the Hospital compound - thinking the building behind the main one looked rather old. Upon seeing this old building up close, I was completely fooled by the new "coat." I stood there confused for quite a few minutes, but just when I was about to move on again, three female nurses headed my way (I am sure the Ploeg Sisters would have been very proud!).

So I approached them and asked, "不好意思, 请问, 那个三十年代盖的生命活水医院的楼在那里? (Excuse me, sorry for bothering you - do you know where the original Water of Life Hospital Building is located － the one built in the 1930s)?"

They pleasantly told me in unison, or rather exclaimed in unison with one pointing at the building, "先生, 就在这里 - 就是眼前这个 (Sir, it is right here - it is right in front of your eyes)!" 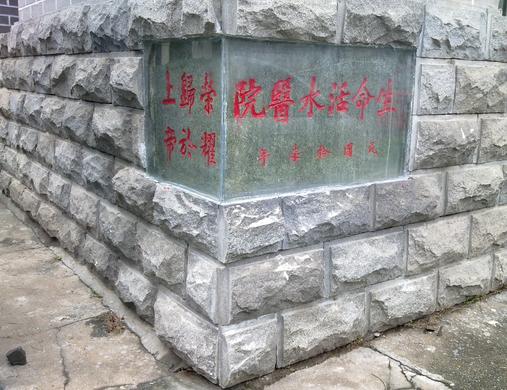 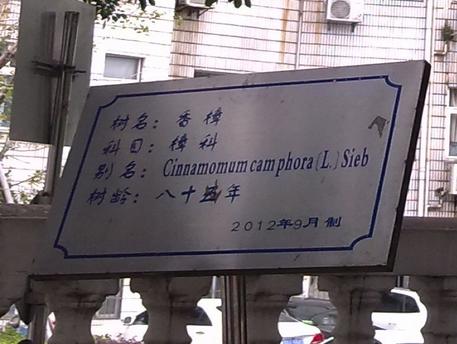 There is no mention of Dr. Edward C. Perkins and his former co-workers or anything related to the Methodist Missions to the best of my knowledge.
But many trees are marked with their nearly precise age, such as the camphor tree shown above (Cinnamomum camphora), which is sitting by a hill leading up to the front of the WLH Building. Perfect! The year 2016 minus 85 Years Old = the Year 1931 when the hospital was near completion.
Yes, the plaque was made in September 2012 – but close enough! People might not have appreciated the fact that it took roughly five years to build

this gigantic state of the art Hospital, not to mention all the staff housings they were also building at the time.

The Corner Stone Etchings in the Left Photo

The Short Panel:  "荣耀歸於上帝" (The glory and the honor belong to God)

Please See the Diagram Below for Its Location

These painted etchings seemed to be replicates of the original etchings (see photo at right) on the front gate of WLH when it was built.

These new carvings are also smaller than the originals.  The original front gate of WLH was no where to be found.

Please note that the entire building is coated with a gray-colored plaster layer that has the fake-brick design.

The original bricks would peek out from underneath the peeled-off plaster; they are not in great conditions. 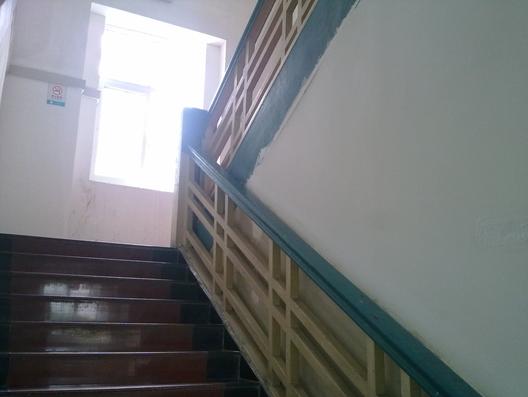 Left side of the West Wing:

An elevator had been installed inside the glass case at the left side.