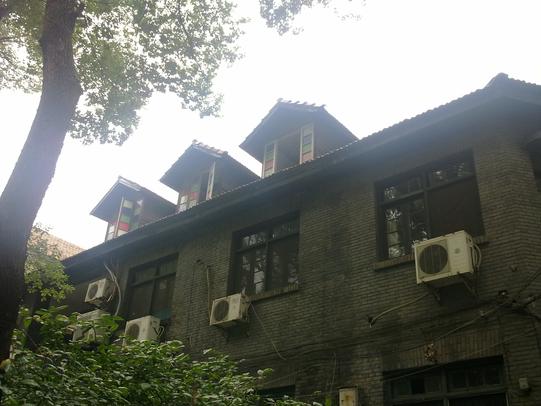 DAY-2 IN KIUKIANG. If you believe that searching for the Perkins’ old residence on South Ta-Ling Road (塔玲南路) would pose a real challenge for me, you could very well be right.  After all, I failed to recognize the humongous WLH Building when I was standing right in front of it, even after I had seen so many photos of the old WLH Building. Although I had learned that the house is still there on South Ta-Ling Road (塔玲南路), I have much less to go by for the original house where Dr. and Mrs. Perkins had lived.

Fortunately, when one types "裴敬思医生" and "塔玲南路,九江" into Bai-Du (百度), a major Chinese search engine, one could find five to six websites documenting the existence of the house or the history associated with it. These webpages are written mostly in Chinese, with many dated in 2012. One wonders if the year 2012 was somehow special since those plaques were also made in 2012, marking the age of camphor trees in the WLH Compound.  A few sites contain a blurred photo or two, along with a street address! One site claims that the address is 53 South Ta-Ling Road (塔玲南路53号), while a few others indicating 56 South Ta-Ling Road (塔玲南路56号) or 86 East Xun-Yang Road (浔阳东路86号).  This last address was confusing and appeared to be unrelated.

Most importantly, I learned that the house has been approved by the City of Kiukiang (Xun-Yang County – 浔阳区) as a historical landmark and is being protected.

So - how difficult can it be?

Walking through the streets of Kiukiang at night and seeing the lights and the crowd while looking for a place to eat that is not spicy, I wondered what it was like in 1918.

After I had some noodles at a place that was not spicy-hot (they do not seem to know how to cook without drowning everything with hot peppers in Kiukiang), I went back to the coffee shop with the best Internet access yesterday. I asked if they served red wine – the answer was a quick no.  Red wine appeared to be in “great shortage” in Kiukiang, which should be quite unlike 1918, when this place was crawling with foreigners - or in modern language, expats.  Nearly giving up and asking for a beer instead, I looked up at shelves lined against the wall and saw a large rectangle box.

The boy at the counter was very helpful.  He climbed up the ladder and got the box that looked like containing a bottle of sorts, and said, "是的,好像是红酒 (Yes, this looks like red wine)."

"我就要买这个 (Yes, I will take that)!" I exclaimed.  He told me he had to call his boss to make sure this was okay since this box (and the bottle of red wine therein) was likely there for decorations only and that it was considered an antique bottle, a valuable item, or keepsake.

"My goodness," I thought, "the only bottle of red in town I am looking at is for decorations - the year 1994 is considered antiquated?"  He came back shortly with a big grin and said - "我老板说这个红酒可以卖,但可能不是很好喝 - 他说就卖¥198,可以吗? (Yes, my boss said it is okay to sell it to you, but this is probably not a good wine - so how about ¥198, will that work)?"

I smiled and said, "行! 其实这个红酒应该很好 (A deal! And actually, this wine should be very good)."

Why was I so confident about this red wine?  Well, many years ago, I made an unforgettable trip passing through Jia-Yu Guan or Jia-Yu Pass (嘉峪关 – "天下第一雄关"), an ancient corridor for the Northwest frontier of China, en route to a small town called Dun-Huang (敦煌市) hidden away in the famed Gobi Desert (戈壁沙漠) at the edge of Xin-Jiang Province (新疆省). Once there, locals told me that their grapes are even better than those grown in Southern Australia or the Mediterranean areas and that, as a result, their red wine is awesome.  And they were right!

Of course, the town of Dun-Huang (敦煌市) was a key cross point right on the Silk Road (丝绸之路).

What a coincidence!  Here in Kiukiang, thousands of miles away from the desert, the only bottle of red wine I found in town was from Dun-Huang.

Now completely relaxed with my wine, I took out my laptop and downloaded all the photos I had taken. Right then there, I had to concede that none of these houses I saw today looked anything like the ones on Mrs. Perkins' photos.  Most critically, by reexamining maps and photo captions, the locations of these houses were way off. 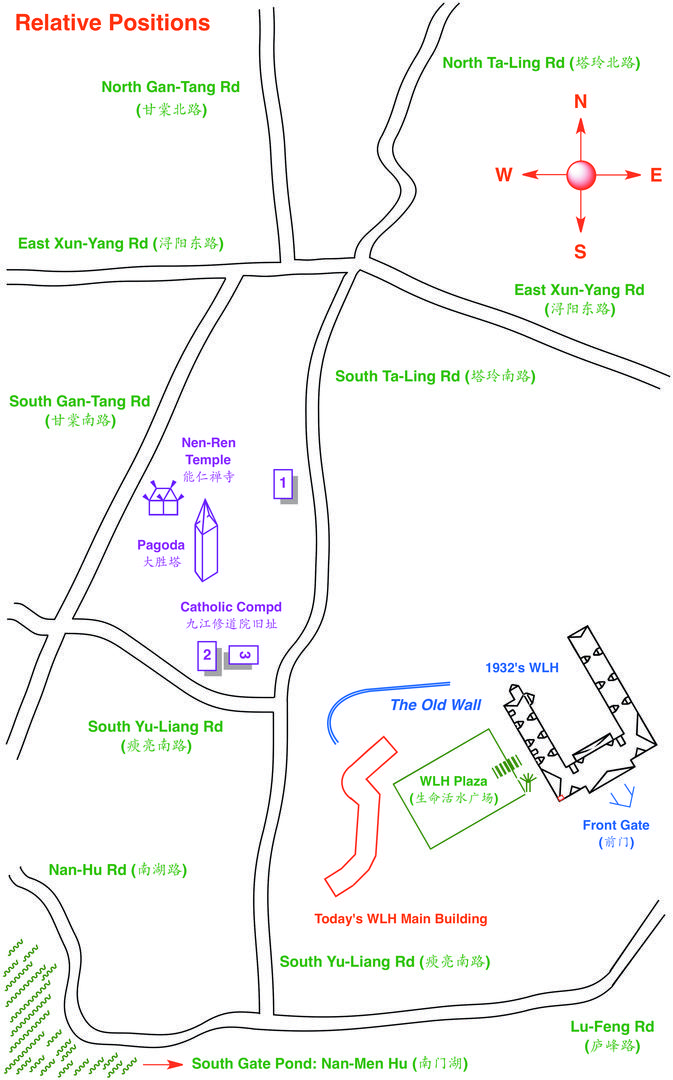 She chuckled, "呵呵,先生,您也太会说话了 – 我还年轻呀. 啊呀,我还真的不知道 (Hah-hah, Sir, you are very funny! Do I look too young to you? Anyway, I don't know)."

I gauged her age and realized that I was becoming intrusive.  So I was ready to leave, but before I turned around, I asked her how I could check out the Pagoda (大胜塔) since the house should be nearby.  She gave me a very detailed instruction for getting into Nen-Ren Temple (能仁侍), and there, one could get right next to the Pagoda (See the map above).

Original Captions: "Our new walk up the hill, leading up to our new home." 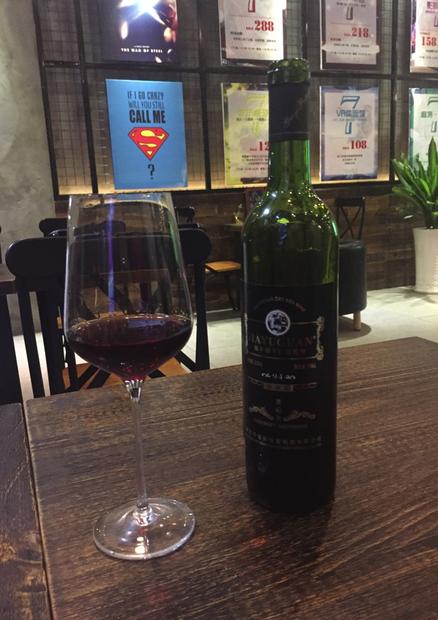 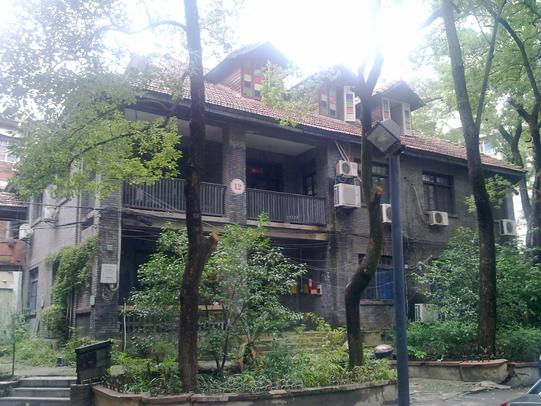 I entered the courtyard and saw a house to the Pagoda's right that looked suspiciously like the Perkins' house with several palm trees around it.  At least it is an old house with Western styles. I only took a snap of it from across the street after leaving the courtyard (see the photo above).  For its precise location, please refer to House-1 by South Ta-Ling Road on the map at left.

I did not get a great look at this house because I was quickly interrupted by a woman, likely in her 70s or 80s, who came over and greeted me.

"阿姨,您知道曾经有个美国传教师叫裴敬思医生吗? 他和他的夫人就住在这条路上,您知道他们的房子在哪里吗? (Ma'am, do you know of an American missionary named Dr. Pei Jing-Si? He and his wife had lived on this street many decades ago. They had a house nearby, and do you know where the house is)?" I answered.

"裴医生曾经是山下的那个生命活水医院的院长 (Dr. Pei was at one point the Dean of that hospital down the hill called Water of Life Hospital)."  I quickly added.

"没有听说过 (No, never heard of it)," She persisted.

"真的? 那阿姨您太年轻了. 裴医生是1914年来到九江,他1918年建立了这个生命活水医院,山下的那个是1932年建的 (Really - then, ma'am, you are too young. Dr. Pei came to Kiukiang in 1914. The hospital was established in 1918, and that new building down the hill was built in 1932)." I began to explain but wondered if I was talking too much and scaring her away instead. 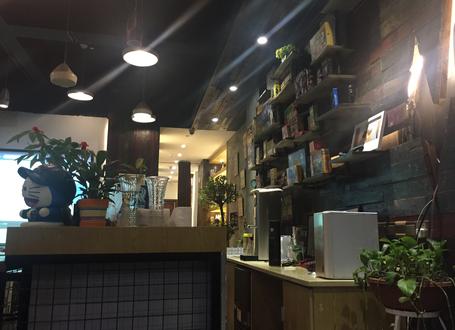 House-3 on the map 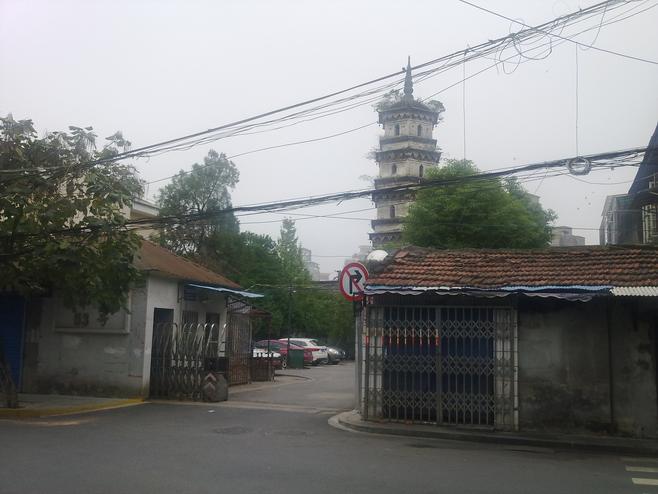 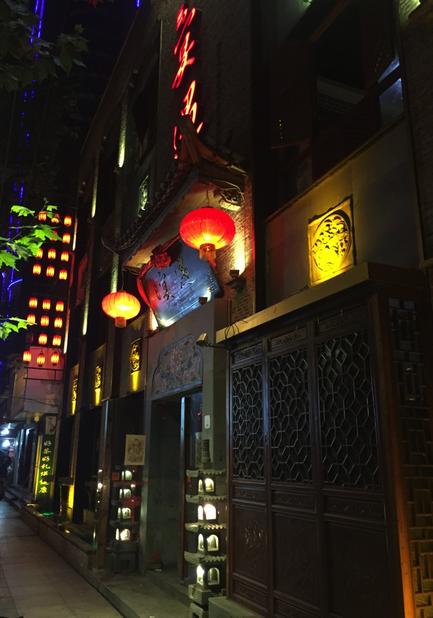 Building-2 on the map

One interactive map I had come across once via Bai-Du (百度) has a marking of "裴敬思别墅旧址 (Pei Jing-Si Former Residence)" on South Ta-Ling Road (See the screenshot at right), but 53 S. Ta-Ling Road that I did find was not it.  I did not see any street numbering that says 56 S. Ta-Ling Road. There was just a row of small stores and stretches of walls by where it should be.

Rereading Chinese documentation regarding the house, I also noticed four words that I had missed or ignored: "行署大院 (The Administrative Yard)," a compound labeled on a Bai-Du searchable map. 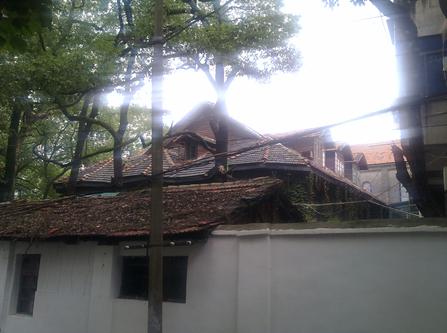 Looking down from 53 South Ta-Ling Road 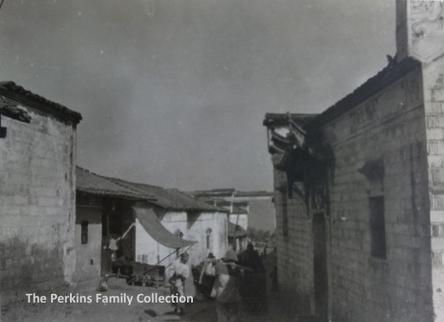 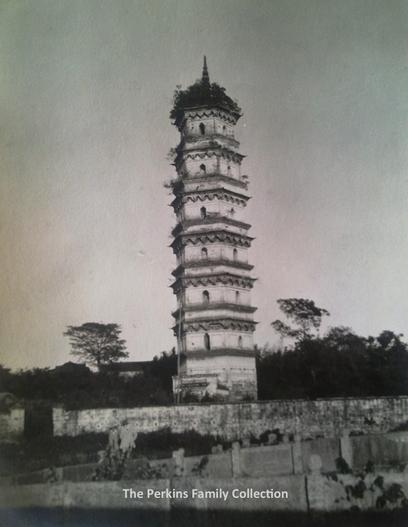 The most significant discovery of the day was this Catholic Church Compound (literal translations: 天主教－修道院). There is an actual church-looking building, but I am not sure if it is functional. The front entrance of the compound is on the same street as that of Nen-Ren Temple (能仁禅寺) – called South Yu-Laing Road (瘐亮南路).  The white-haired man at the front gate did not stop me as I entered and began to roam around this huge compound.  The main building at the compound's center is distinctively Western-styled (See the two photos at left and Building-2 on the map). The first floor of the building has a bar called "Bar 1930 (1930 酒吧)."  To the building's right is a big house, which looked really like the Perkins House (See the two photos at right; and House-3 on the map).  It, too, was built at least in the early part of the twentieth century.

I then approached this older man at the front gate, and he told me that various missionaries built these buildings in the 1930s (and thus, the bar name). His comments corroborated with what a few older adults from Nen-Ren Temple (能仁禅寺) told me.  They believed that whatever I was looking for was all in this compound.

Not quite sold on any of this, I left the Catholic Church Compound and proceeded back towards the WLH Hospital.  There I went back up the hill on South Ta-Ling Road.

Before I knew it, I had gone up and down - back and forth - on this road six times!

However, I could not find the address 56 S. Ta-Ling Road (塔玲南路56号)! Nor could I locate 86 East Xun-Yang Road (浔阳东路86号) when I decided to cross East Xun-Yang Road (浔阳东路) and search further on North Ta-Ling Road (塔玲北路).  By late afternoon, I came strolling back to this compound and circled House-3 a few dozen times.  I began to sell myself that this might just be it and that I had found the former Perkins' residence.

I knocked on the door of Bar 1930, trying to see if they were open, as I could use a beer by then.  They were not (I am not sure if it is even functional).  So, I went back up the hill on S. Ta-Ling Road one last time, but this time, I took special notice of this long wall, which starts at the bottom of the hill, reaching 53 S. Ta-Ling Road (and beyond).  One can sense the wall is very old, with stretches painted or plastered over (See photos below). 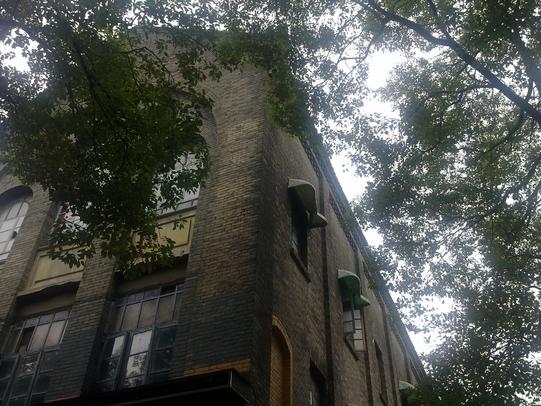 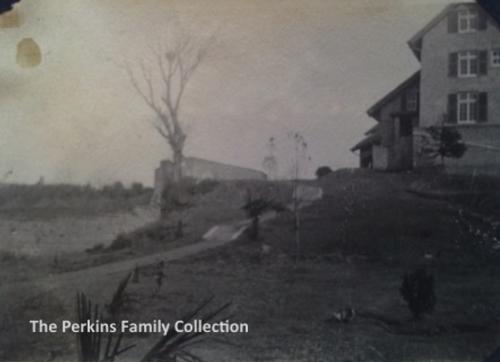 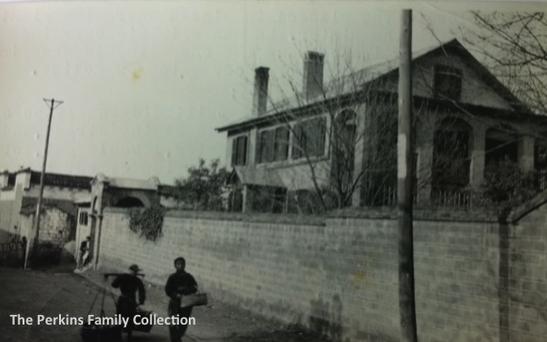 Armed with critical info, the above two photos, and a couple of maps, I headed out on yet another misty day. I would note that these maps were also in Chinese downloaded from Bai-Du (百度). In case I needed to ask for directions in Chinese, a Google Map in English wouldn’t be as useful.

South Ta-Ling Road was not difficult to locate, as it is right by the WLH Compound. So up the hill, I went – much like the photo at right and captions by Mrs. Perkins when she went up the old Ta-Ling Road daily. Well, my walk up was perhaps a little different.  The photo below shows what I saw once at the top of the hill.  I was delighted to see the Pagoda for which I have seen so many times in those old photos. I was also confused at least initially by its height and relative location, but please notice the street number on the wall:  塔玲南路53号.

For the next hour or so, I figured out the orientation of the Pagoda (大胜塔) relative to Nen-Ren Temple (能仁禅寺), and South Ta-Ling Road. The Pagoda is very tall when standing at the bottom of the hill looking up. I took some time to walk around inside the temple because it was right in the midst of their afternoon service and that the Perkins had visited here more than once. I enjoyed listening to their harmonious and synchronized chanting. It was very soothing and relaxing.

A close-up of House-1 behind the wall 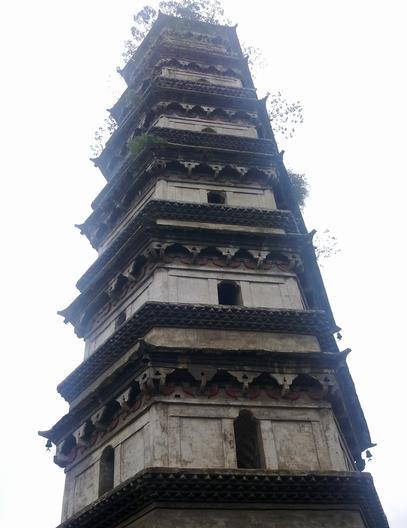 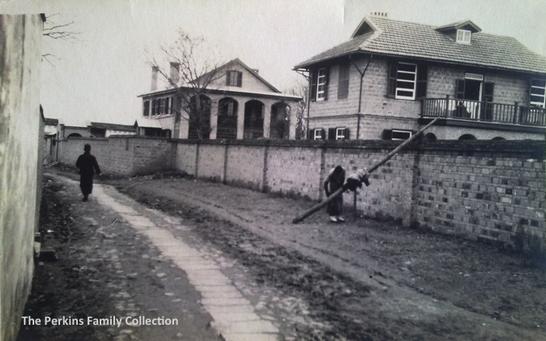 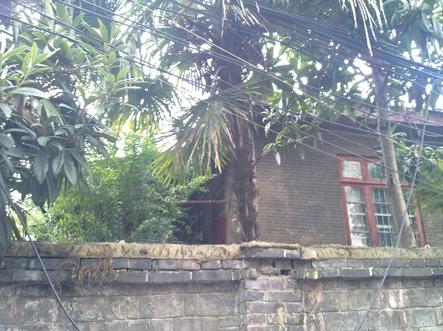 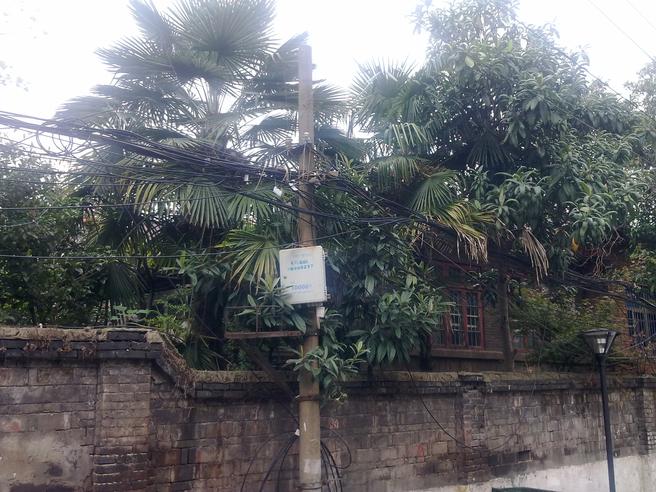 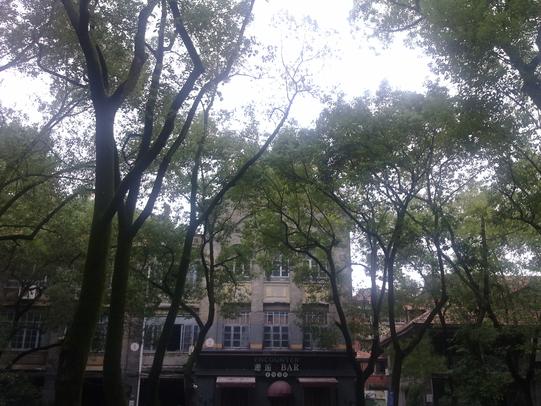 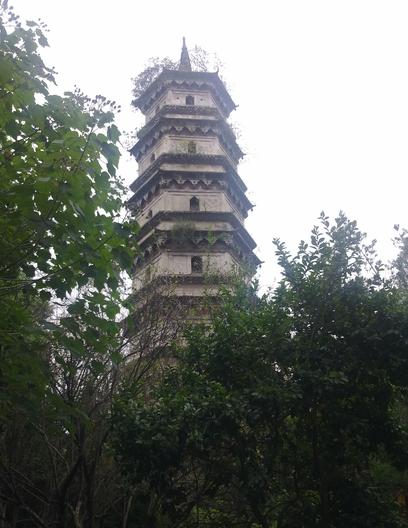 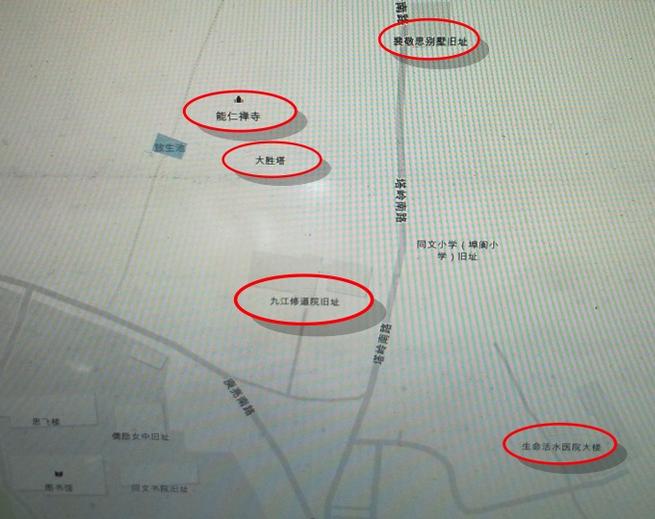 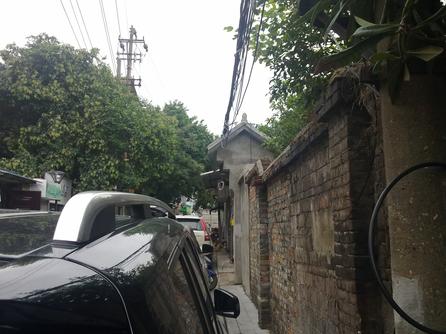 Original Captions: "The street outside the wall behind our new home; we call the house the 'Wayside Inn'."

The back of House-3 behind a long wall that went