It is amazing to find that in 1918 foreigners were asked to learn the Chinese language when they intended to work and live in China and that these westerners would comply. The year 1918 was merely 18 years after the infamous Eight-Nation Alliance (八国联军) trampled through Tientsin (天津), raped and pillaged their way to Peking (北京). More significantly, the year 1918 was just six years after Dr. Sun Yat-Sen (孫中山先生) and his revolutionary counterparts established the first Republic Government in China, which effectively ended the 3,000-year feudalistic rule, ushered in modern China, and took the first steps toward independence and legitimacy.  In contrast, it is noteworthy that some one hundred years later, many western and foreign personnel have no interest in learning the language.  Instead, some would demand Chinese people communicate solely in English to them or else. And the fact that some in today's China would still tolerate such arrogance and humiliation is disheartening.

There are many sound reasons why an alphabetic language such as English should be designated as an international language. It is the most widespread because it is phonemic (and not pictographic) and digital. However, to put things in perspective, the western imperialistic aggression between the 17th and 19th Centuries was the main reason why today English is regarded as the international choice of communication. One could make an argument that if it weren’t for the Empire of “never setting sun” and her naval prowess, the international language of choice in the 21st Century could have been Spanish, Portuguese, Dutch, German, or French, for that matter. Regardless of today’s economical and technological state in China, should a Chinese be demanding an Englishman speaking Chinese under broad daylight on Kensington's streets, and that his children be forced to learn geometry or biology in Chinese? Of course, that would be ludicrous, although not a complete impossibility. In an alternative universe, China would have persisted its maritime ambitions with an imperialistic pretext in the early 1400s when Zheng He's expeditions (郑和下西洋) using the biggest ship known to man sailed further on the sea than anyone on earth and predated both voyages by Bartolomeu Dias and Christopher Columbia by about eighty years.

Yes, people from anywhere should learn English now that it is considered a major international language, and such opportunity should be made available at all levels of educations. Simultaneously, there should be a balance between being proficient in a mother language and one that is of need basis; there should always be a balance between venerating one’s own culture and embracing a foreign one. The two shouldn't be mutually exclusive but preferably additive. On that note, we can all agree that her language ranks at the top when it comes to pride and symbol of any cultures.

Returning to the topic at hand, while acquiring the English language as a skill is immeasurably desired, in any given era serving many purposes including that of religious intent, the willingness of any foreigner to learn Chinese represents the most genuine indication that he/she is here to respect and help, and not oppress and rule. 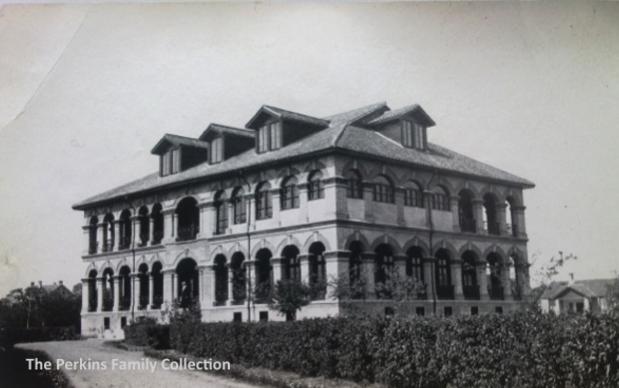 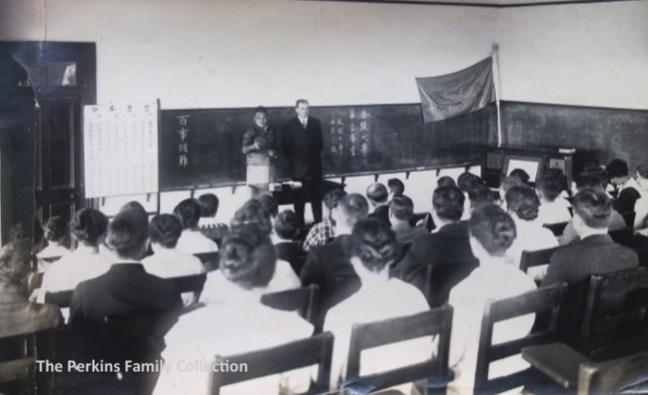 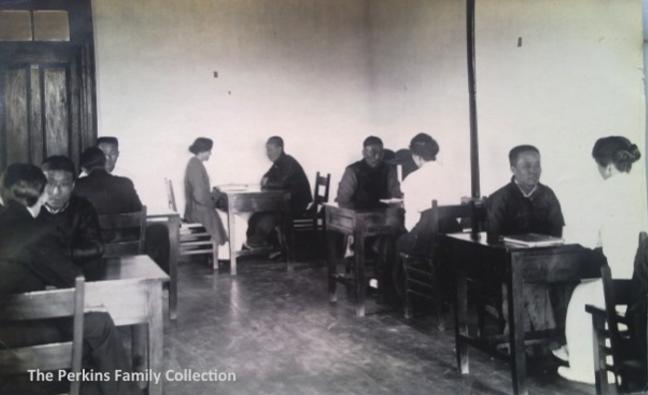 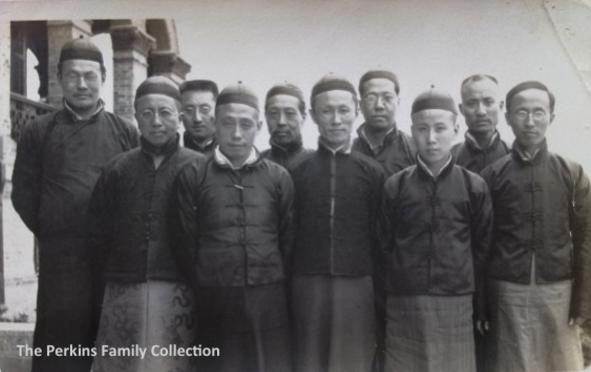 "The way we work with private teachers at the Nanking Language School, 1st year pupils class of 1918. {OC}"

On the back, Mrs. Perkins wrote:

"A beautiful building, very sunshiny and pleasant, where chapel is held & new characters for each day given; photo taken by a member of the Camera Club. {OC}"

Mr. Gia, Principal of Nanking University Language School (金陵大學華言學堂校长) is seen standing at the front on a platform with a translator (Mr. Keen):

"The way new characters are presented each morning to the first year class at Nanking Language School. {OC}"

"At Mr. Keen's right, characters on the blackboard were,Nanking University Language School - May 6 of the 7th year of The Republic (金陵大學, 明国七年, 五月六號). {OC}"

At Mr. Gia's left is the Chinese proverb: 'All things are hard at the beginning (百事頭難)'