Inspirations  for "Up In the Air".   As I sat by my gate at a major airport in the southwest region of the US, waiting for my flight, I thought I should start writing a long overdue explanation, or the source of my inspiration (if you would) for the theme of this webpage. Most likely, I will not be able to complete this piece all in one setting or in one flight, but I think I will still have enough moments like now, sitting and waiting…. and waiting….

A disclaimer is needed here. Unlike my usual inner obsession to be perfect when it comes to searching for precedence of an idea – any idea, I have not done any actual homework here except borrowing the 2009-Film Title “Up in the Air” (and thus in quote) based on a book of the same title written by Walter Kirn.

No, the film is not my all time favor.  As a matter of fact, it falls rather short on that short list, although I gave two thumbs up for acting jobs done by George Clooney, Vera Farmiga, and others. The chief director Jason Reitman and his colleagues did an outstanding job of bringing a mundane but an everyday reality to life on a big screen.  The stories therein, the surroundings, the events, the conversations, and the people were so real that the film managed to strike a cord even with general viewers – and not just million milers.

With each mile we fly, we collect precious coinage metals like “Gold”, “Platinum”, and “Silver”, and expensive stones like “Diamond”, “Emerald”, “Sapphire,” “Ruby”, and “Crystal.”  I often wondered what other stone names they would come up with in the future – maybe “the moon rocks elite” – why not – especially since we have seen those rocks.

We constantly find ways to be the “first” to check in, to rebook, to board, to drink, to eat, to sleep, to pee, and to get off. We some times jump ahead of all those poor souls still waiting, when there is a need to standby for whatever reasons – transparent and non-transparent.  Some times, we just want to get on an earlier flight and go home; and so we choose to standby, and then guess what, we still get upgraded.  How great (annoying) is that?  Even a 4-year old girl knows the answer.  There was one years ago, after getting away from the grip of her mother, came towards me, and put her tiny hands on my left arm and asked, "Sir, would it be such a terrible idea, if I sit next to you in that big seat?"

Of course, here is not sure if they are still flying, but likely to the much dismay of Ryan (George) and Alex (Vera), things have changed drastically in the past decade.

With ever toughening competition and deepening greed, flying is no longer the best or the only way to earn miles and elite statuses.  People, who get a couple credit cards associated with an airline or find other creative loopholes designed by airlines (just read this very informative article by Jill Zacchia), would be given enough miles to fly free and to upgrade to first class, and that they would be regarded as an elite flier.  With freebies, they could also enjoy the Airport Lounge that used to be so quiet and nice – just like in the film, but now…. well.... Anyway, I have long ago given up the Club or the Lounge however much discount on the annual fee they show me for whatever “stone level” I hold at the time.

I now prefer the outside….  Outside is often quieter and less chaotic because there are no "complimentary" food counters to race to. WiFi is now free at most airports, and that "free" wine is no longer that tantalizing for the hour(s) before boarding.

Outside is wide open – and existential….

More disturbingly, look at the length of lines for the Elite-1s and Elite-2s!  More and more “elite buyers and frequent fliers” would begin to stand in lines well before gate agents even announce anything.  Despite holding the trump card for boarding, this is now the best way to ensure premier carry-ons would find a piece of real estate in the plane, recognizing that as much as 50% of the flight could be elite and premier.

Lately, I would often find myself seething with envy. While standing there in a premier line bored and anxious, I would see plenty of none elite fliers would still be comfortably seated.  Those Zone-5’ers seemed calm, just reading, chatting, or having their ears plugged even when the gate agent began to blast the overhead speaker that the boarding process would soon commence.  Most of them had few carry-ons and looked rather unconcerned.  They appeared to be content with the fact that they board last, and that they expect no real estate over their head except the two by two floor space in front of their two feet….

Who are more stressed out about flying these days; and the lines for check-in and security with a suddenly overwhelming amount of premier members – uh, never mind – I don't want to go there.  It was a good thing that the film was made in 2009 and not today.  This film would have a hellish sequel if it ever comes to that.

Ah, my apology, I just digressed with a useless rant that sounded more spoiled and whining than anything else…. Okay, back to the film, and yes, I believe that unfortunately only a few people in this world could truly appreciate the real essence of this film, and that “select” crowd would include me – an insanely avid flier.

No, I am nowhere near George’s ten million miles accomplishment, although mine is nowhere close to the level of his job’s demand for traveling.  Nor could I match his zealous in becoming world’s 7th and the youngest person to do so.  However, I would claim I could twirl a roller as well as George did…. and perhaps, I am also as charming as his character was in the film.

That said, I am completing my second million miles with multiple airlines over quit a few decades.  I guess I could be well on my way to three million miles if it weren’t for one major airline eating up my beloved one in the name of partnership.  The day they erased the all to familiar acronym and removed the logo on the tail-wing, I mysteriously went from a bona fide million-miler to a regular traveler.  But like I told my students when I did some teaching years ago, “Whatever you have learned and earned, no one can ever take it away from you regardless what they write on your report cards.”

And so with that, I would claim I have been to and back from the moon more than three times by now – and not too many people can say that – not even Apollo astronauts.

So how did this idea come about – posting panels of 4-6 photos of the moving scene right outside of my window? 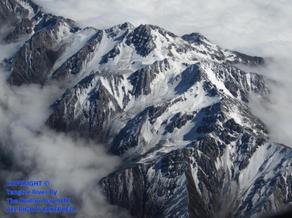 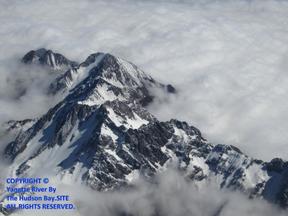 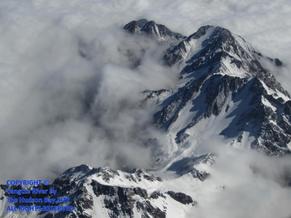 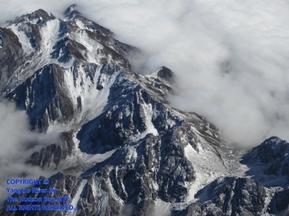 Inspirations  for "Up In the Air"